Paul Lisai started Sweet Rowen Farmstead in 2011 a few years after graduating from Sterling College in Craftsbury.  From experience working for Jones Farm, a conventional dairy, and Pete’s Greens, an organic vegetable farm, he learned what he wanted to do—and what he did not. Paul has carefully built his own farming business to balance risk and reward by maintaining a mix of markets for his milk, building a varied product line, and growing conservatively.

Paul appreciated that dairy generates steady cash flow year-round, in contrast with much northern-climate, plant-based farming. On the flip side, he saw how hard it was to make a solid business shipping a commodity product like fluid milk. If he was going to do dairy, Paul concluded that he needed to create something value-added and do his own marketing and distribution like Pete’s Greens.

Through his jobs on farms in the Northeast Kingdom, Paul was able to find land there and start his herd of Vermont Heritage Linebacks. Having working for a Vermont company supplying small-scale pasteurization equipment, Paul was able to set up his own plant.  At the Montpelier farmers’ market in 2012, he began offering bottled milk but immediately realized he needed more products to sell. The next week he made his first batch of farmer’s cheese and tripled sales.

After completing a Vermont Farm and Forest Viability Program business plan, Paul was ready to look for his own land. The 100-acre farm he bought was not officially on the market when he approached the owner, who was willing to wait for full payment for 18 months. Paul was able to make it work through a combination of loans from FSA, Yankee Farm Credit, and the Vermont Land Trust, to which he later sold development rights. He also recognized that he was lucky to have had access to his mother’s 60-acre parcel where he built his first home with a creamery.

This housing proved useful to help retain employees in his earlier years. Paul currently employs five full-time plus two part-time workers. It is always a challenge to find good labor with appropriate specialty dairy experience, he says, acknowledging that the Northeast Kingdom can be a hard and remote place to live, especially during long, severe winters. “People say they want to move here, but I don’t trust them,” he says.

“Farmers markets are good for experimenting with new products.”

Sweet Rowen’s line of products includes gently pasteurized, cream-top, whole milk as well as a variety of fresh and aged cheeses all made with the milk from 30 cows. Most of the company’s sales are within 50 miles of West Glover through several farmers’ markets; direct sales to key accounts like his alma mater, Sterling College; the Craftsbury Outdoor Center and the town’s general store; as well as limited distribution through some specialty distributors. Paul adds that the farmers’ markets are “good for experimenting with new products.”

“You insure what you can’t replace”

Paul had his first close-up experience with risk early on. The creamery he then shared with another small producer was destroyed by fire due to a heater malfunction. He had good insurance, he reflects thankfully: “My grandfather always told me you insure what you can’t replace.” As his business has grown, he is more focused now on product liability insurance. All of Sweet Rowen’s financial records are in QuickBooks and his farming records in spreadsheets. A recent focus has been completing the 200-page plan required by the FSMA (Food Safety Modernization Act). Paul has a couple key advisors: his accountant, Charles Capaldi, and Rose Wilson with whom he started working through the Intervale Center’s Farm Viability Program. “My willingness to take risks is largely her doing,” he says of his work with Rose in understanding the opportunities and requirements of growing his business. 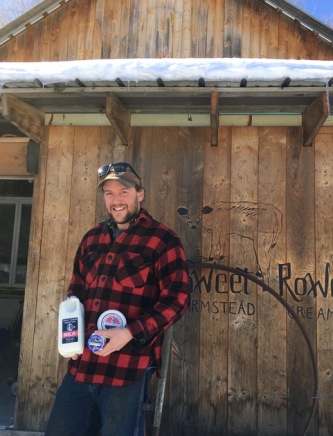 Another way Paul manages risk from the production side is membership in the Agri-Mark co-op. The co-op buys milk during periods when Sweet Rowen has more milk than he can use.  Paul calves year-round and raises all his own forage, buying in just non-GMO grain for his herd. For seven months of the year, the animals are rotationally grazed and Paul feels very strongly about the positive contribution this form of agriculture can make to ecological resilience.

Paul considers Sweet Rowen to have been a success so far. “I did what I set out to do,” he says with satisfaction. “I can pay my bills and pay my employees and I’m able to take time off myself, to make space for family and community.” He would like to let go a little more and is considering splitting the creamery from the farm and selling one part of the business.

“I don’t ever want to be in a place where I can’t walk away.”

Sweet Rowen has grown, but cautiously. Paul briefly considered building a new $1 million creamery in the milking barn but decided against it. “We all struggle with scale,” Paul says. “I recommend people map out the place they’re going to stop.” He decided instead to expand the first floor of the creamery, but is moving slowly as the business generates the revenue to pay construction bills. The new space will cost around $200,000 and will provide a more efficient and comfortable working space. “I’m scared to death of borrowing money and getting stuck,” he says. “I don’t ever want to be in a place where I can’t walk away.”

The competitive landscape has changed since Paul began Sweet Rowen. He believes the business has a positive future but he is also willing to walk away if it stops working.  “The minute we start losing money, I will pull the plug,” Paul says. “I’ve watched too many friends and neighbors hold onto something that died 20 years ago.”

Suzy works on and writes about issues at the intersections of risk, climate, environment, and economics in farming including food, fiber, waste, and energy. She is based at UVM Center for Sustainable Agriculture.
View all posts by Suzy Hodgson →
This entry was posted in Farmer Profiles, Food Safety, Insurance, Land access, Marketing, Quality of Life, Risk management and tagged dairy, farm viability, farmers markets, Insurance, regulation, Risk management. Bookmark the permalink.
Loading Comments...
%d bloggers like this: